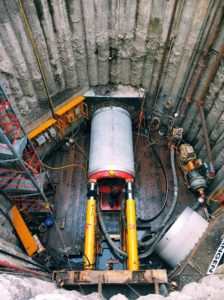 The programme of work included the installation of some 933 m of ID1800mm diameter pipe using microtunnelling techniques. Denys engaged experienced microtunnelling contractor K-Boringen to complete this part of the project.

The microtunnelling works were to be completed using the contractor’s Herrenknecht manufactured microtunnelling machine which utilised a TUnIS Navigation MTGyro guidance system from VMT. What made this operation unusual is that, where normally an HWL (Hydrostatic Water Level) system would be used in conjunction with the Gyro system to establish elevation of the boring machine, on this project it was decided that this would not be utilised. This is believed to be the first time such a a pipe jacking project has been undertaken by the contractor without the HWL. This was decided to simplify operations during excavation.

In order to maintain the required tolerances and in particular not to create a counter slope, control measurements were planned at intervals of approximately 60 m. This corresponds to a typical control measurement interval when using gyro navigation systems.

The control measurements were carried out by the specialists from VMT, who were on site during the entire course of the project in order to optimally support the new generation system TUnIS Navigation MT. Since the intention was to extend the control measurement intervals above the usual 60 m, a tunnel laser was installed parallel to the gyro system, which was used to spot-check the determined position.

The navigation with gyro compass and without hydro level has proven itself in this project, with the specified tolerances being adhered to at all times. 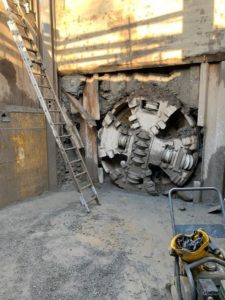 Given the location of the new sewer under the high speed double-track railway Liege – Namur, the project also utilised a VMT MODUS (Modular System for automated Deformation Monitoring) system to monitor the deformation of the rails, an application which is rather unusual for microtunnelling projects where bore diameters are relatively small and ground deformation is usually extremely limited.

“Working without the use of the hydrostatic water level simplified the handling of the drive considerably. Due to production requirements the intervals of our check surveys to monitor the accuracy of the gyro guidance system were a little longer than we would have liked. However, despite this, the alternative calculation method for the vertical position has reached the accuracies that VMT had stated in advance and the bore has been completed within the required tolerances.

For tunnels with very small gradients, it wouldn’t be optimal to rely solely on this new calculation method – however, this project has shown us that, with the right equipment and the right back-up, we can achieve the necessary accuracy of the drive without a hydrostatic water level.” 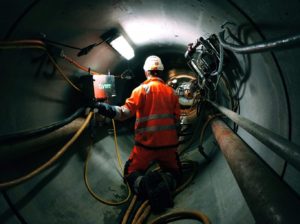 K-Boringen was awarded the contract for the new sewer system, which would be installed using microtunnelling equipment. The sewer required the installation of an ID1600 mm pipe string over a length of 548 m. Included in the drive were two curves forming an ‘S’ bend with one curve having a minimum 300 m radius and the second having a minimum radius of 600 m.

Being a long-term user of VMT Navigation Systems, K-Boringen opted to utilise VMT’s new generation system TUnIS Navigation MT in combination with the similarly newly developed hardware platform MT.connect, for highest accuracy of the drives (particularly through the curved sections).

For optimal transparency and overview of the tunnelling process, Jackcontrol provided their Microtunnelling Support System (MSS) together with their equipment for the monitoring of joint movements and pressures inside the pipe string.

Based on the long-term partnership between Jackcontrol and VMT, Jackcontrol has recently decided to participate in the development of MT.connect. As a result both companies are now using the same hardware platform for their systems, significantly minimising the hardware efforts for the jobsite and making handling much easier.

Tunnelling began in early October 2020 with breakthrough being achieved at the reception shaft on 9 December, just some 10 weeks later. 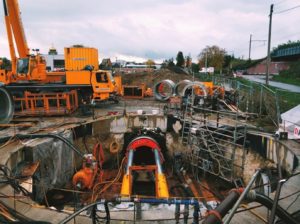 The project also marked the first use in Belgium of the TUnIS Navigation MTLaserTotalstation and MT.connect navigational hardware alongside the Jackcontrol tunnelling system. A few minor teething problems in the new navigation software were quickly overcome, with VMT providing site support and access to the Product Management Team at the head office in Bruchsal.

“Running the Jackcontrol and VMT systems over the same hardware platform, MT.connect, worked very well, making handling faster and easier. We’re definitely keen to work with the VMT and Jackcontrol combination again and plan to use MT.connect for our next long straights and curved drives.”